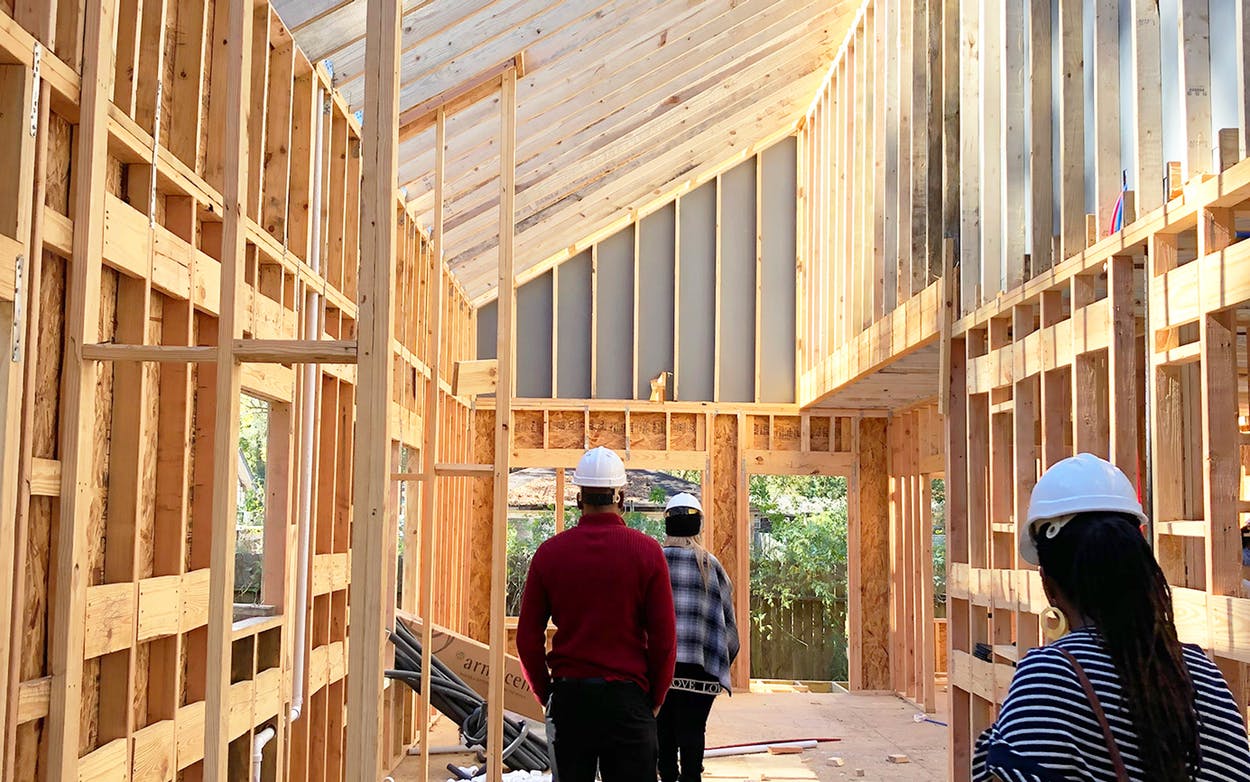 This article by John Nova Lomax originally appeared on TexasMonthly.

Houston’s reputation as a relatively affordable big city has taken a battering in recent years. Despite a downturn in oil prices, the real estate market has continued to set price records—to the joy of sellers and brokers, but to the dismay of buyers and renters.

Affordability has long been one of the Bayou City’s prime selling points. Houston may have been polluted, mosquito-infested, traffic-choked, swelteringly humid, subject to frequent biblical deluges, and overrun by gigantic flying cockroaches, but the houses were cheap. On paper at least, there were few better places to achieve the American Dream.

Not so much anymore. According to a Harvard University survey, Greater Houston’s 2017 home-price-to-income ratio of 3.7 is the highest it has ever been, and well above the “golden rule” of home affordability (that your monthly home payment not exceed 28 percent of your income).

The old adage “Drive until you qualify” is increasingly stretched to the point of absurdity when you consider that Houston—the city proper, plus the surrounding towns and the contiguous unincorporated sprawl of strip malls, feeder roads, parking lots, and housing developments—now fills the entirety of the land between the floodplains of the Trinity River to the east and those of Big Brazos to the west. It’s at those fringes, far-flung locales deeper and deeper in the Piney Woods to the north and the storm-wracked coastal prairies to the south, that you can still find three-bedroom, two-bath starter homes under $200,000.

It’s also in select transitional neighborhoods closer to the city center, where more and more often families find themselves beaten to the punch by institutional investors who transform properties into rentals or raze and replace them with townhouses.

Investors have long enjoyed a significant advantage over traditional homebuyers—namely, lots of cash. Now they’ve seized the advantage of time too. High-tech data-mining companies like Houston-based Entera can feed thousands of data points about a property, sight-unseen, into an algorithm in seconds and then market that property to an investor who can, and often does, buy it without so much as a drive-by. According to a recent Houston Chronicle article, Blackstone and American Homes 4 Rent, two of the country’s largest real estate investment trusts, work with Entera. Between them, the companies have purchased at least 5,800 Houston homes in recent years.

How can a traditional homebuyer—who spends hours upon hours poring over listings online, additional hours driving around, and hours more at open houses and showings—compete with that? Most often, they can’t—especially in the case of people on limited incomes in search of a unicorn of a first home. Entera likes it that way. “We hope we’re very hard to compete against,” the company’s co-founder, Robert Salmons, told the Chronicle.

Meanwhile, according to the Kinder Institute, a Rice University–affiliated think tank, nearly 306,000 Harris County households face severe problems (including a lack of kitchen or bathroom facilities, high costs, or overcrowding). Almost 215,000 Houston households spend more than half of their income on housing, and only eighteen affordable housing units exist for every one hundred extremely low-income households in the Greater Houston area, the nation’s third-worst ratio.

Given all that, the famously no-zoning, laissez-faire H-Town is enacting measures that would once have been considered unthinkable. Prominent among them was the formation last year of the Houston Community Land Trust, an independent nonprofit that has partnered with the city government to, in its words, “make affordable homeownership achievable for limited-income households in Houston, Texas.”

Here’s how a CLT works: Qualified homebuyers with an average monthly household income at or below 80 percent of the area’s median income (adjusted for family size) can buy a home from the trust at a below-market price. The homeowner gets a deed to the house and a 99-year, renewable, inheritable lease on the land, over which the trust retains ownership in perpetuity. The buyer must also agree to a cap on the property’s resale value—increasing no more than 1.25 percent annually—so that it remains affordable whenever it hits the market again.

The largest, and perhaps best known, CLT in America today is the Champlain Housing Trust, a Vermont organization founded in 1984 with the vigorous assistance of then-Burlington mayor Bernie Sanders. Texas’s own first community land trust, run through the Guadalupe Neighborhood Development Corporation, formed as a brake on gentrification in historically black and Hispanic East Austin. It built its first land-trust property in 2012, the year after the state enacted a property tax exemption for land-trust homes that made the arrangement even more affordable for potential buyers.

Houston’s plan calls for 1,100 homes to be built and sold before 2024—still just a drop in the bucket when it comes to addressing the city’s affordable housing crunch. The trust’s first offerings—six new three-bedroom, two-bath houses in the northwest Acres Homes neighborhood—are on the market for about $75,000 each. That price would result in monthly payments between $785 and $1,000, depending on the mortgage terms. One of the houses is already under contract, with the sale expected to close by the beginning of June.

HCLT’s executive director, Ashley Allen, was surprised by Houston’s dearth of cheap housing when she relocated from Chicago. “Even with a decent salary, decent credit, still my options were limited by income,” she said. “So that got me to thinking: If this is a struggle for me, what is it like for those who are making a little bit over minimum wage, or even those people who are making a decent salary, something like $35,000 to $40,000? The salaries are not keeping up with the rents.”

Imagine a family forced to move from apartment to apartment because rents go up 3 percent a year while incomes rise just one percent or less. Now picture that same family in an affordable home of its own year after year. Such stability does enormous good.

“When they go to look at homes, they’re wondering ‘What happened to the starter homes of yesteryear?’ In most cases those are now $180,000 to $200,000. So what does that mean for hardworking individuals and families?” Allen asks. “It’s either continue to rent, get a home that needs significant repair—which ends up costing you more money—or you end up getting placed out of your own community, which could mean away from where you work and where your family is. The people who’ve made the communities what they are don’t even have the opportunity to buy [there].”

For children, being forced to move means leaving the neighborhood entirely and having to start over in a new school. City of Houston Housing and Community Development director Tom McCasland says children frequently uprooted and relocated are at a distinct disadvantage from those with more stable homes.

“The education folks tell me that’s the single most important indicator in predicting whether or not someone will graduate from high school,” he says. “Anchoring a family to the community, that provides a benefit to the community, and that anchoring provides a significant benefit to the kids in the household by giving them the stability that they need through their school years.”

In central Houston, these problems aren’t limited to minority-majority neighborhoods like the Wards, but also artsy, predominantly white districts like Montrose and the Heights. Affordable apartment projects have been defeated by NIMBYish uprisings in prime Houston neighborhoods in recent years. The local aversion to such developments, even sparkling new ones for prescreened renters, approaches the level of phobia.

McCasland believes that the HCLT model won’t be met with a similar degree of fear and loathing. “Houston is a city of single-family homes, and we have a lot of them. It’s seen as an American Dream thing, and I haven’t heard the same sort of opposition to this program as we’ve seen regarding affordable apartments coming into certain neighborhoods, even if the residents of those homes are at the same income level,” he says.

In a city as geographically widespread as Houston, with famously lackluster public transit, the working poor can feasibly move only so far from job centers like the Med Center and downtown. So turning every neighborhood inside Loop 610 or Beltway 8 into townhouse-dotted, yoga studio-enhanced yuppie enclaves is not a wise option—not today, nor in the decades to come. Given that, Allen said, why not provide an opportunity for the working poor to stabilize their lives and build equity instead of leaving them at the mercies of the free market and ever-rising rents?

“This is a long-term tool that’s been in use for decades to stop displacement and gentrification,” she said. “Before people make a judgment on it, they need to educate themselves on it, look at the bigger picture, and figure out who it’s helping.”

In Houston, that’s everyone from service industry workers to city employees to first responders and teachers, some of whom are forced to get by on a single income.

“For that working mom who has an income that can carry a $75,000 mortgage on a three-bedroom home, this is a dream come true, if they can get that mortgage,” McCasland said. “They can give their kids that backyard they were looking for and be close to the school where they want their kids to go.”

So the American Dream, Houston version, may not be dead after all—flying cockroaches be damned.

Next Article
Entera is Live in Denver
The largest investors rely on Entera’s AI-powered platform to transact on billions in real estate... Now it’s your turn.